Mary Stuart, better known as Mary Queen of Scots (1542 – 1587), led a tumultuous and ultimately ill-fated life. The Scottish Catholic Heritage Collections Trust is honoured to have within its ownership several key artefacts relating directly to the life of this Scottish icon.

Born only a few days before her father James V’s death in 1542, Mary was sent to live at the French Court when she was only five years old. There, she learned and excelled in the courtly arts and eventually married the Frances, Dauphin of France in 1558.

The painting Portrait of Mary Stuart from our collection dates from this happy period in her life.  Mary does not wear a ring so the painting may show her before she married. It could have been painted any time between 1553 and 1558.

We also hold two portraits of Mary Queen of Scots from the end of her life.

The first, known as the Blairs Jewel, is a contemporary miniature portrait of Mary painted during her imprisonment in England. For the last 19 years of Mary’s life, her cousin Queen Elizabeth I kept her prisoner in a series of castles and houses far from Scotland and London to prevent Mary from plotting to take the English throne.

Mary had written to James Beaton, Archbishop of Glasgow, asking him to have four portraits made of her to distribute to her associates. They were to be set in gold and sent to her secretly. The Blairs Jewel portrait shows Mary in middle age, still retaining her signature auburn hair. The miniature was made into a reliquary around 1620. The front is inscribed with the names of female saints, and the rear with those of male saints. This enhances Mary’s posthumous status as a martyr for her Catholic faith.

The highlight of the collection is the full-length Memorial Portrait of Mary Queen of Scots, dressed as she was on the day of her execution at Fotheringhay Castle in 1587. The painting features the execution scene on the left, revealing intimate details of the event, and shows Mary with objects of her Catholic faith such as her prayer book, rosary, and crucifix. The painting was commissioned by Elizabeth Curle, her lady in waiting who was present at the execution and is seen on the far right of the painting.  Upon her death, the painting was donated to the Scots College in Douai and eventually made its way to Blairs College in Aberdeen in 1833. 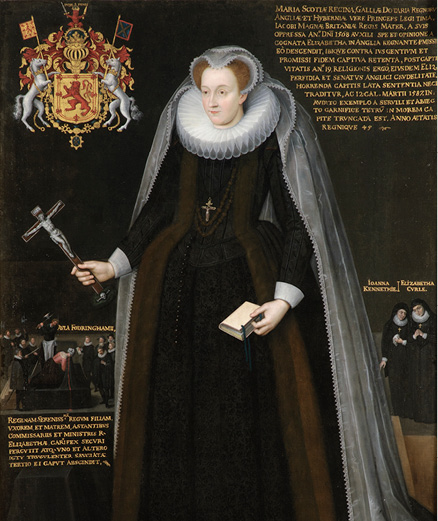